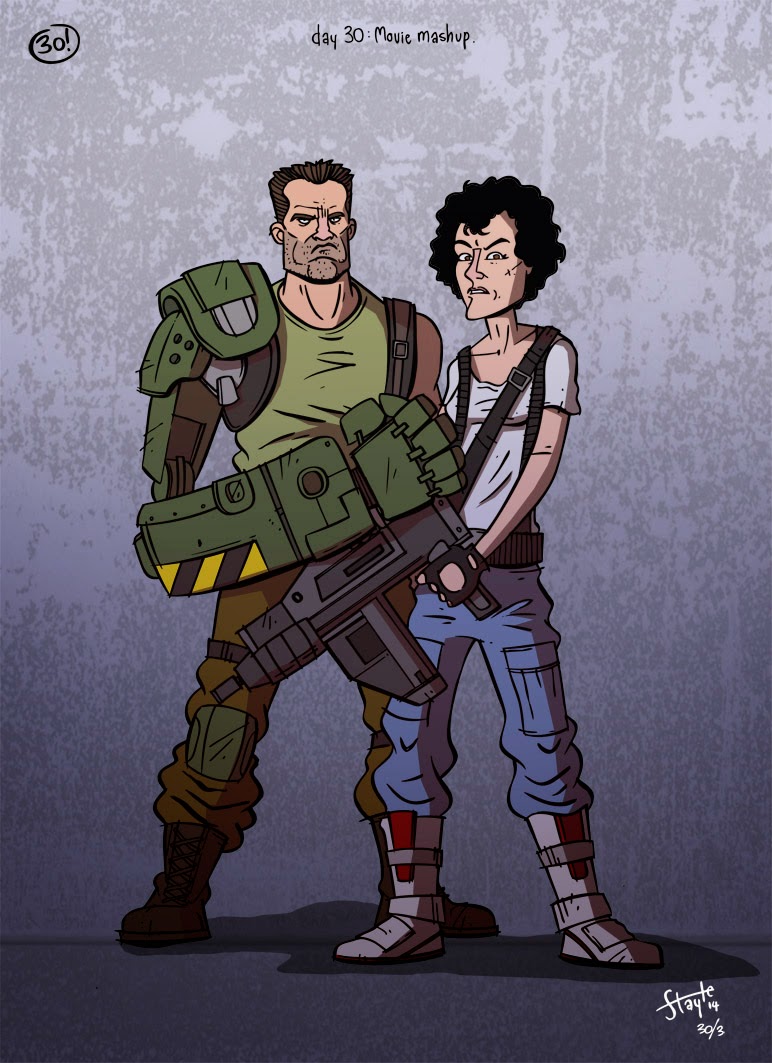 The final challenge was to come up with a movie mashup. The previous Alien Vs Predator movies told us that whoever won, WE lost, and they were right. So I've attempted to readdress the balance and create the AVP movie that people actually want; DUTCH AND RIPLEY. I also gave Dutch the giant robot arm that he has in the old Alien Vs Predator arcade game because, what? I was going to give him two boring SKIN arms? SNORE!

Thanks for checking all these challenges out over the last month, why not try it yourself? It's fun and you'll only occasionally curse your decision to do so!
Posted by James at 19:58 No comments: 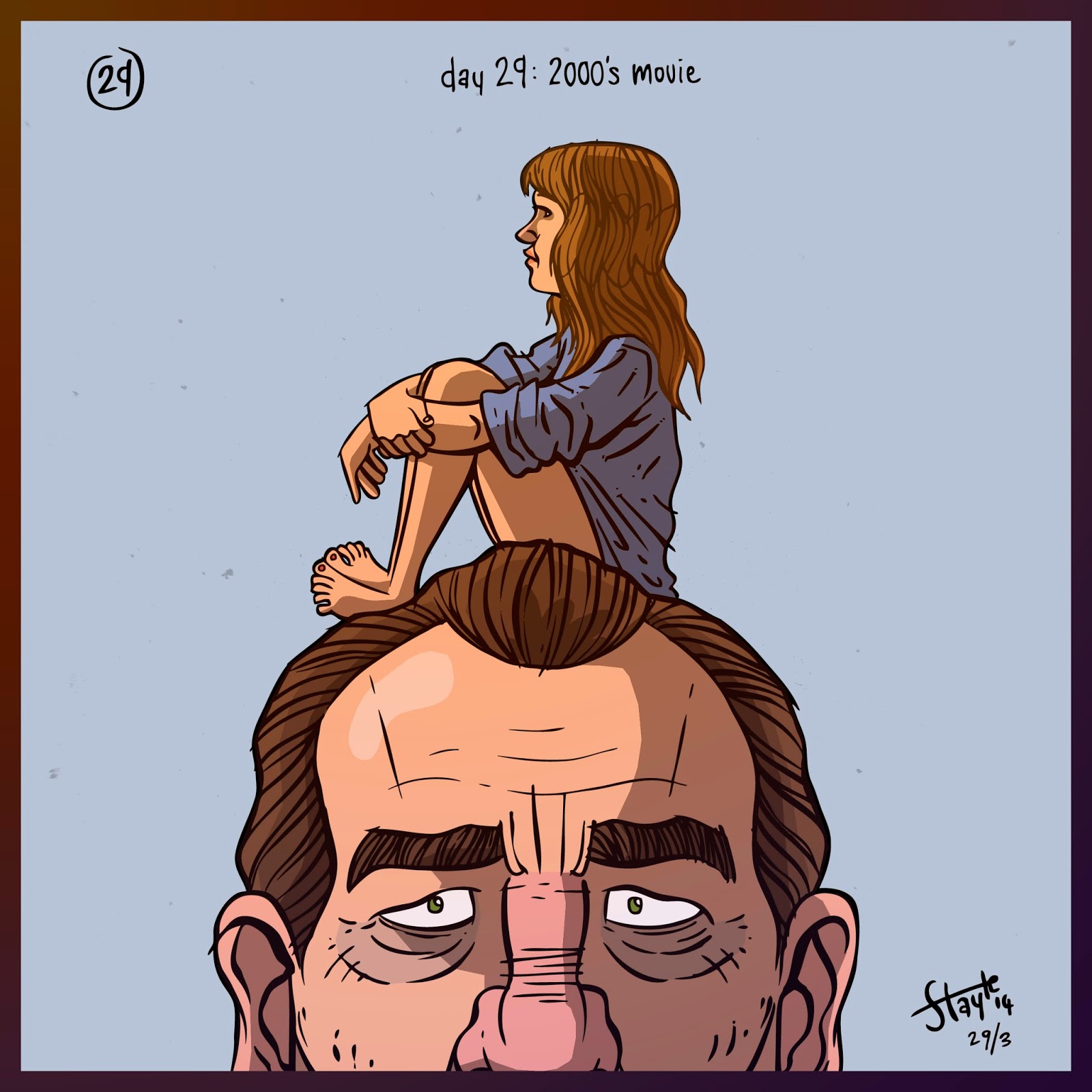 "The more you know who you are, and what you want, the less you let things upset you." - Lost In Translation
Posted by James at 20:24 No comments: 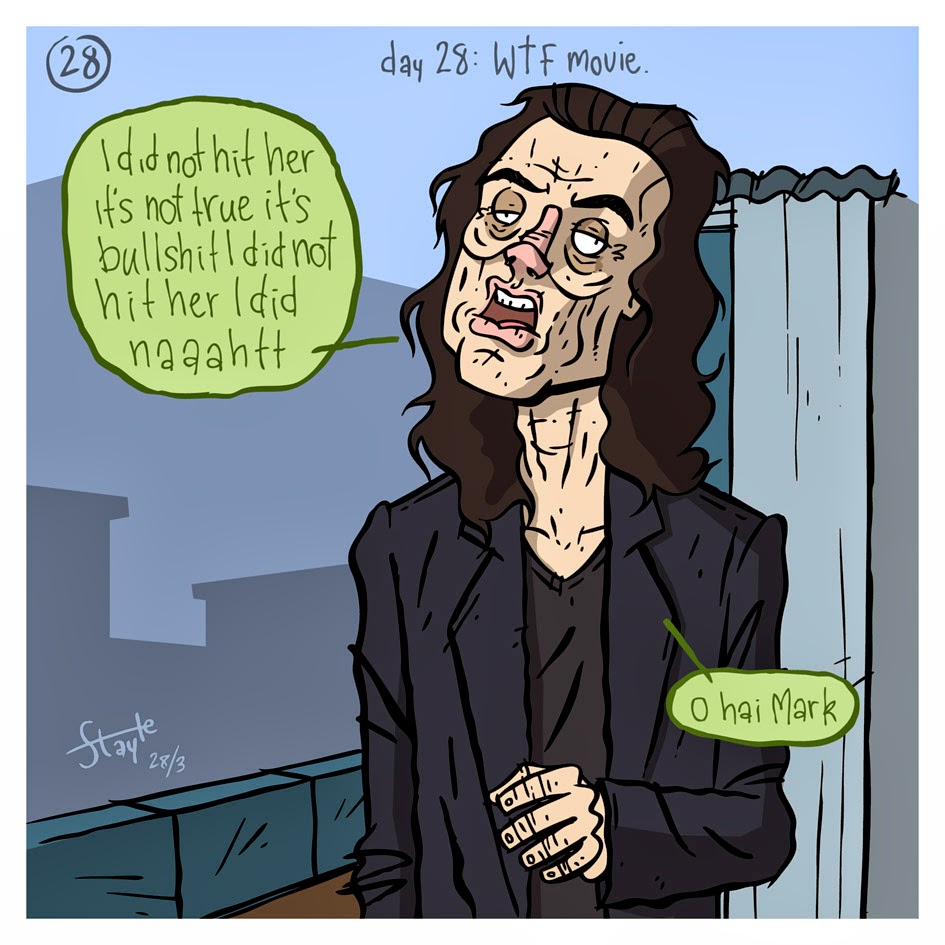 The Room is what a movie would look like if you viewed it through a haunted carnival mirror. Everything about it is wrong and that makes it so, SO right. Tommy, you are my favourite customer.
Posted by James at 21:34 No comments: 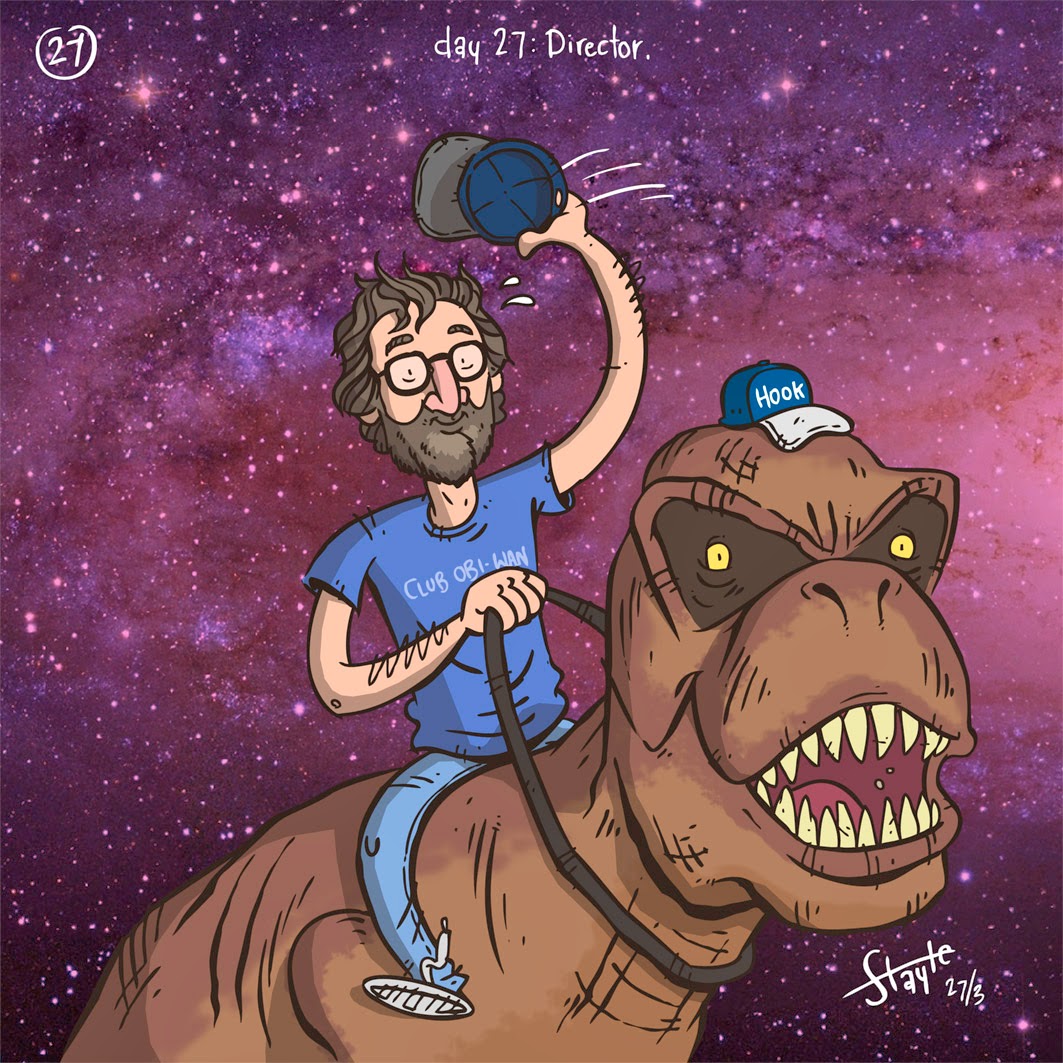 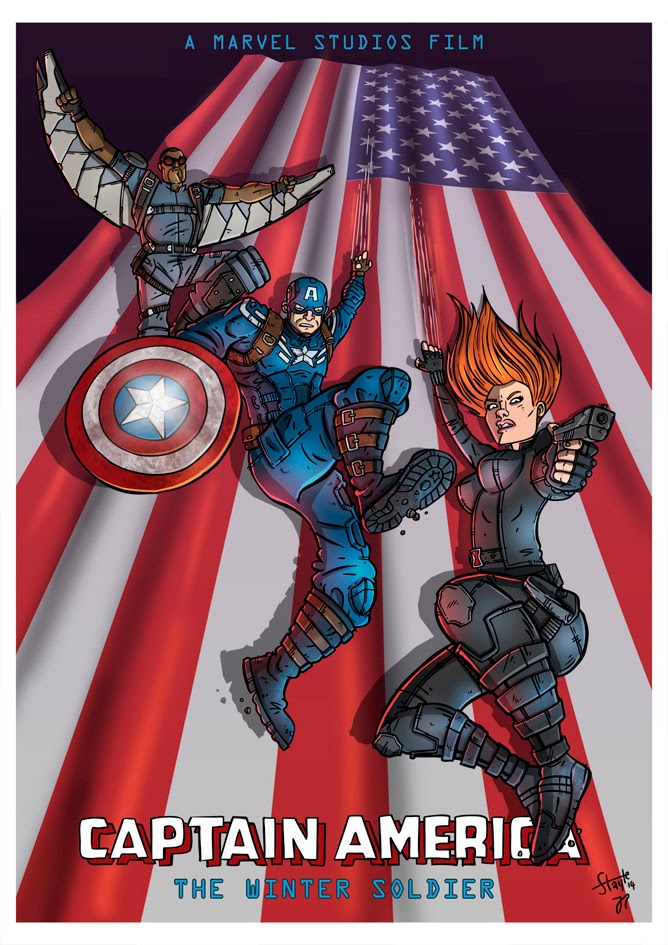 I'm juddering with excitement as I'm mere hours away from seeing this film. This pic was coloured with patriotic, shield throwing skill by John-Paul Bove, colourist of the recently complete Transformers ReGeneration One epic series. HE is my Captain. And hey! This poster was featured in Shortlist.com's alternate Winter Soldier poster gallery!
Posted by James at 15:04 No comments: 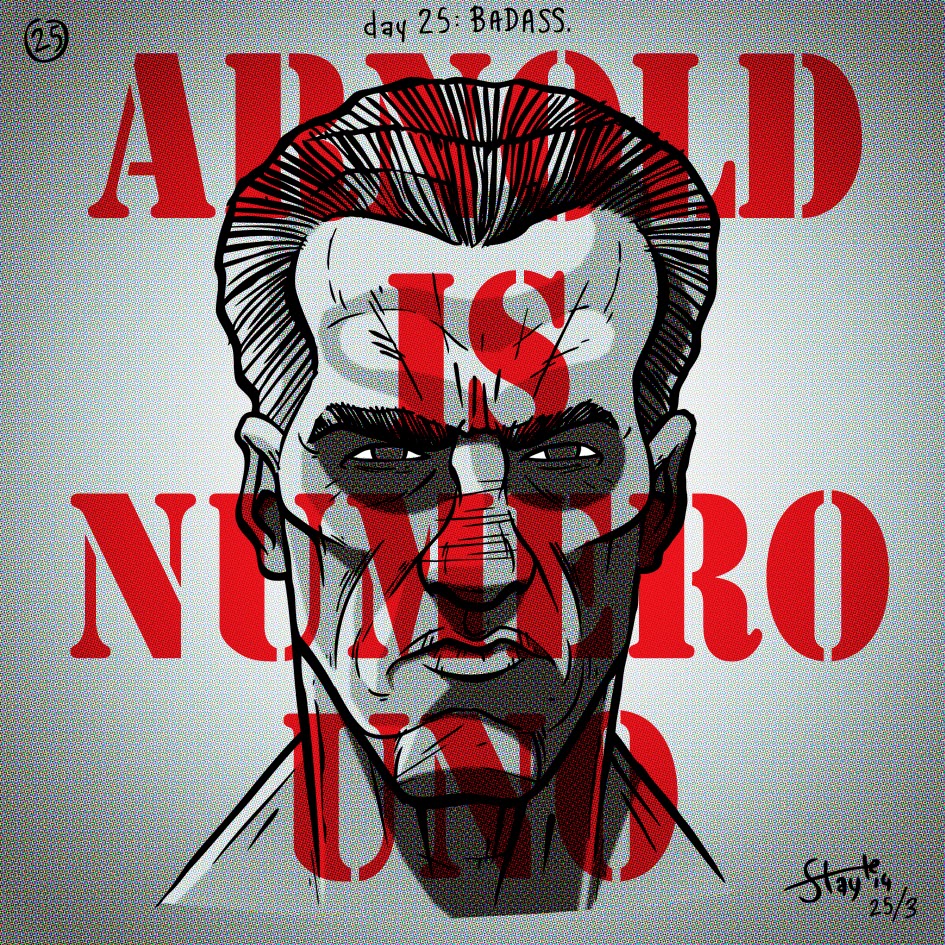 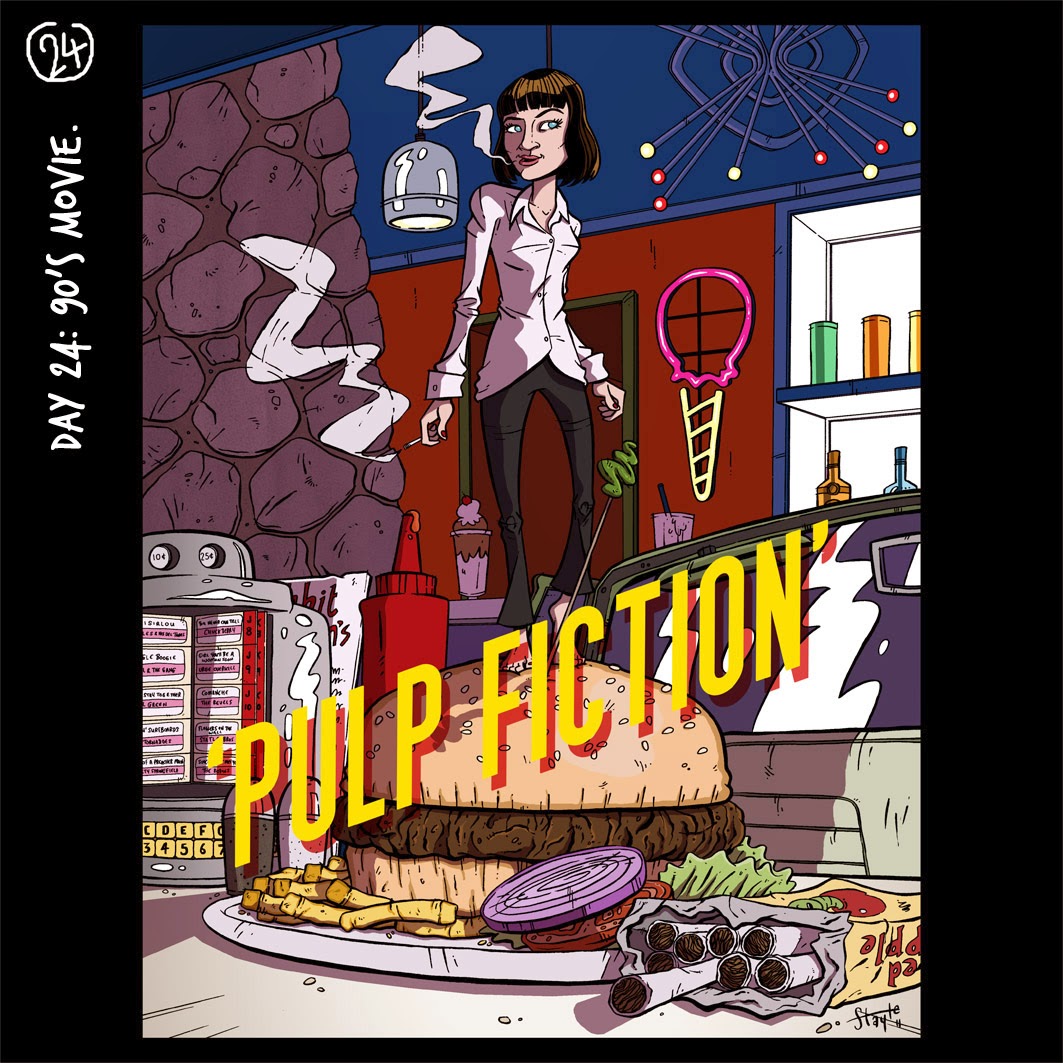 This is an oldie (at least it's an oldie where I come from), but I've been super busy today so I thought I'd repost this picture from a few years ago. Hey Pulp Fiction is 20 years old! That means its been 20 years since I unwrapped the VHS on Christmas Day and my Mum shook her head disapprovingly at me for wanting such a foul mouthed film for Christmas.
Posted by James at 20:05 No comments: 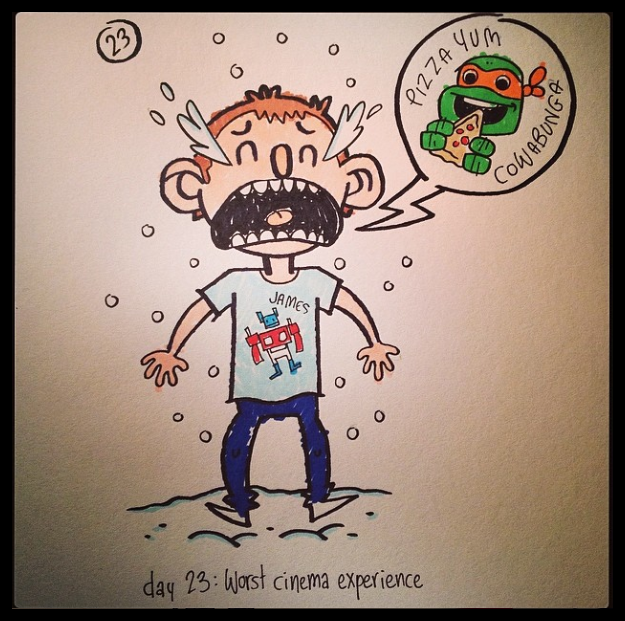 when i was 8 i wanted to go and see teenage mutant ninja turtles but my dad said we couldn't go and see teenage mutant turtles because there was too much snow on the ground and my dad couldn't drive the car over the snow and i was upset and also michaelangelo was upset too probably but then he ate a pizza and did some skateboard i don't like snow
Posted by James at 23:47 No comments: 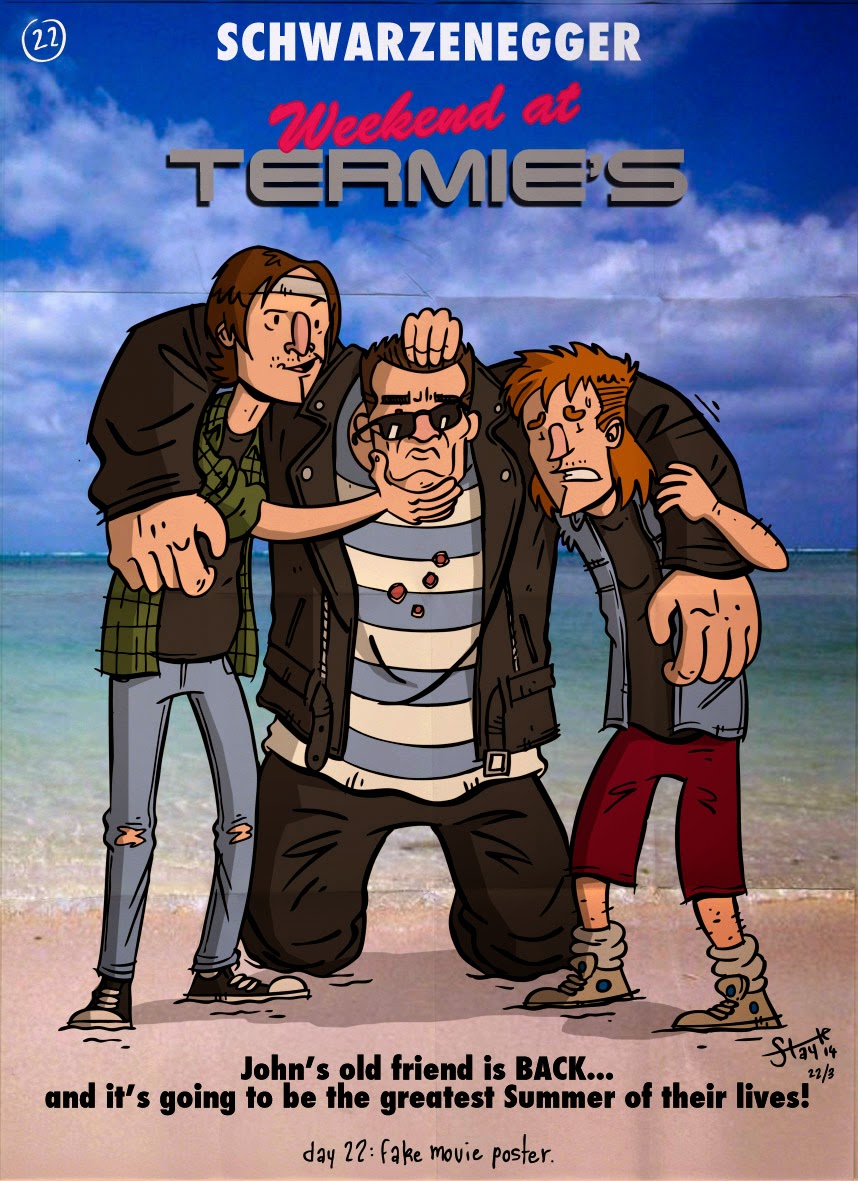 When John and his buddy Tim are packed off to Military School they thought their summer was over. But, when they're assigned the job of painting Drill Officer William Candy's beach house things start to look up. However, when a T-800 sent from the future to destroy John is deactivated by a farting dog, they've got to make sure the immobile metal doofus keeps up appearances with all the babes and dudes in Surf City. He may be a murderous cyborg from a possible apocalyptic futurescape, but that won't stop him being the life of the party!
Posted by James at 17:26 No comments: 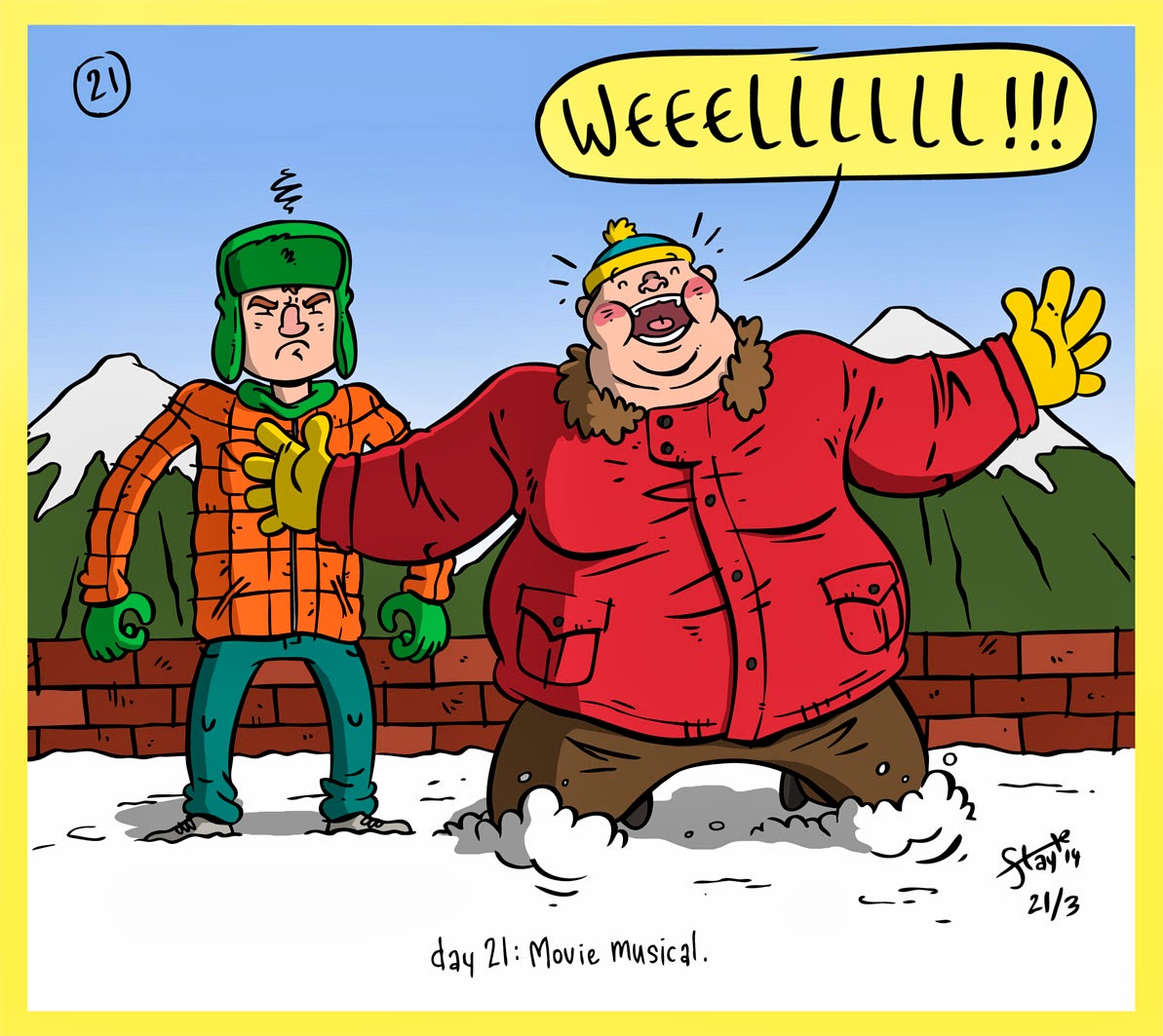 Have you ever met my friend Kyle's Mom? She's the biggest bitch in the whole wide world...
Posted by James at 22:42 No comments: 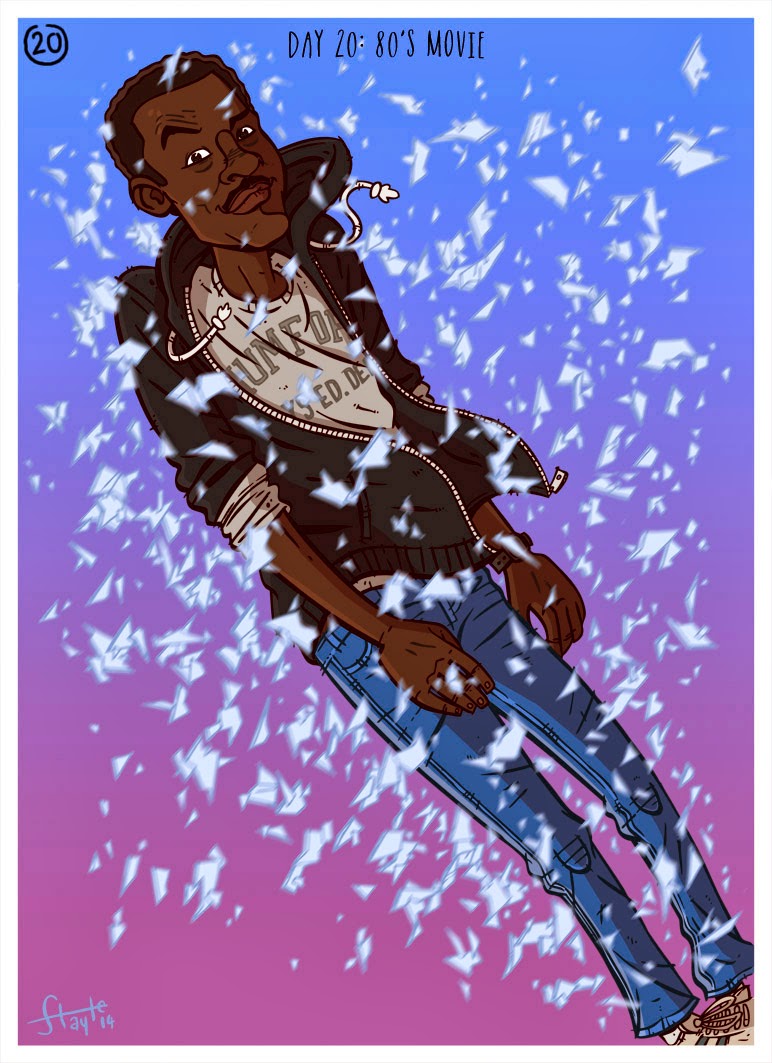 Disturbing the peace? I got thrown out of a window! What's the f*ckin' charge for getting pushed out of a moving car, huh? Jaywalking?
Posted by James at 11:40 No comments: 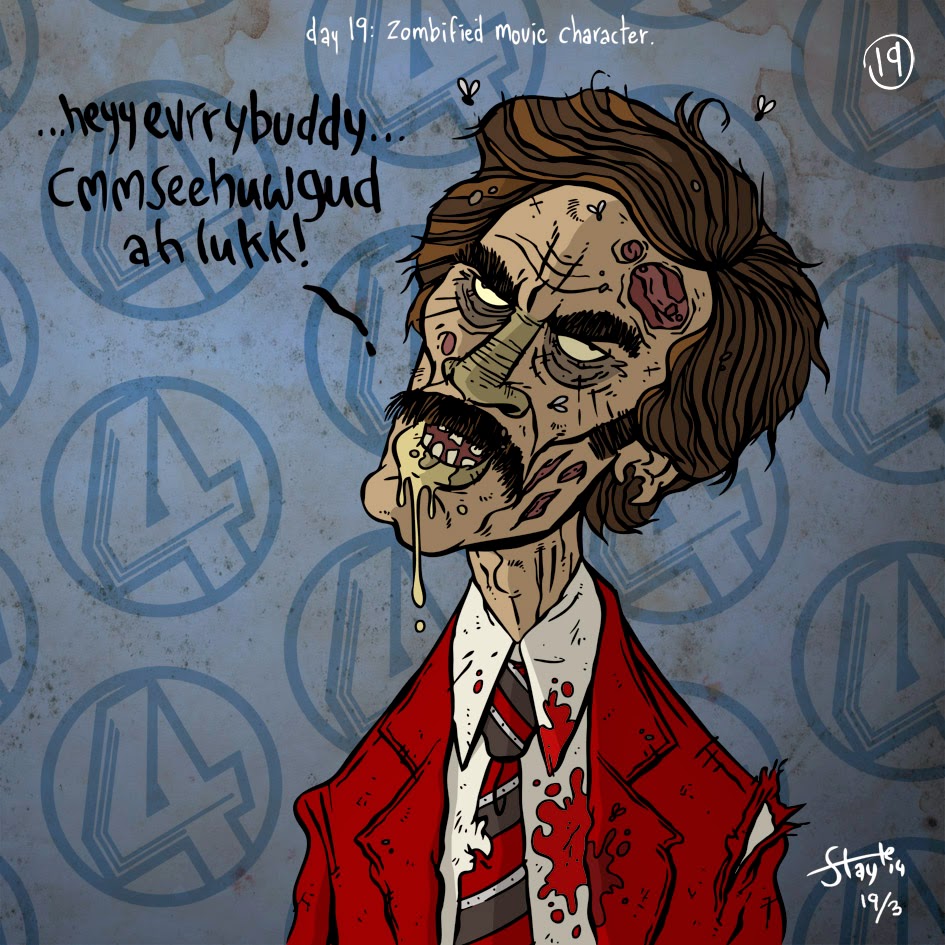 Zomburgundy.
Posted by James at 19:49 No comments: 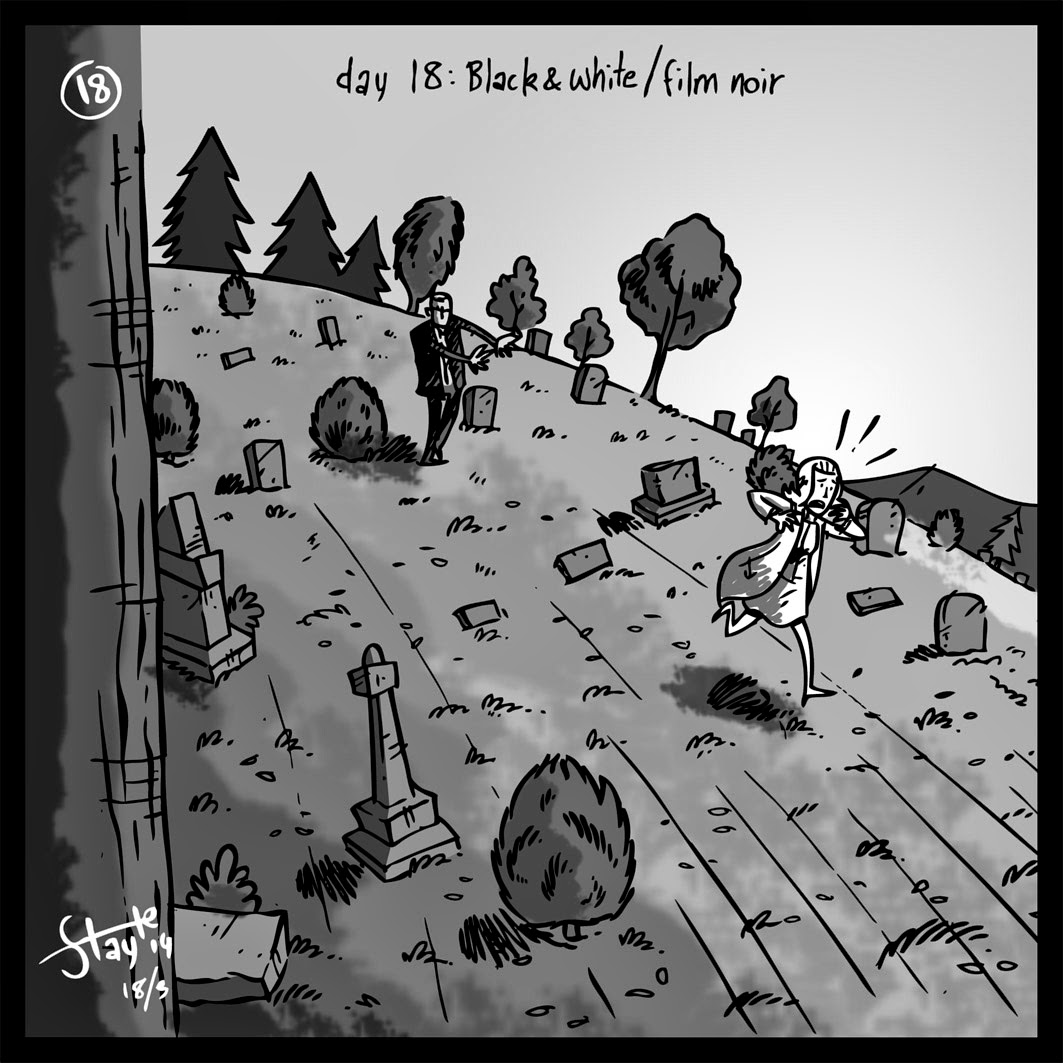 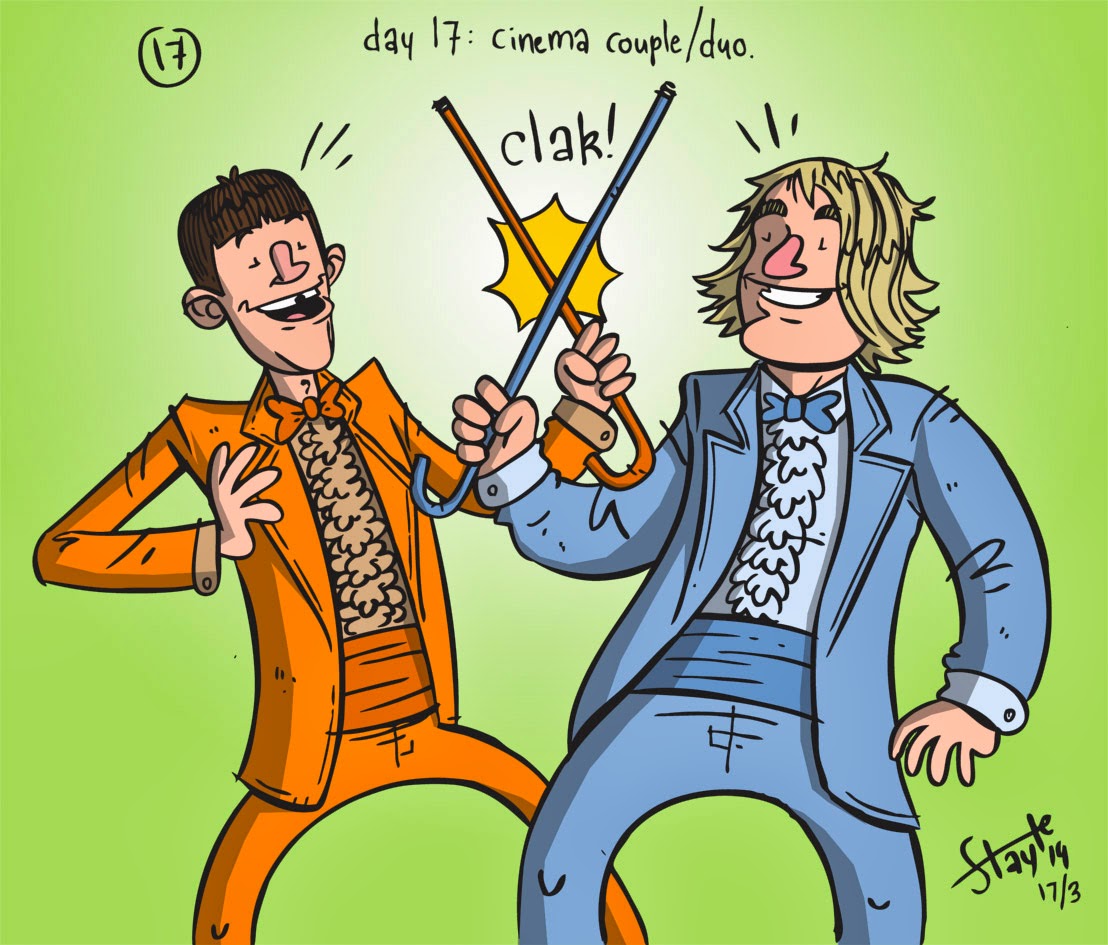 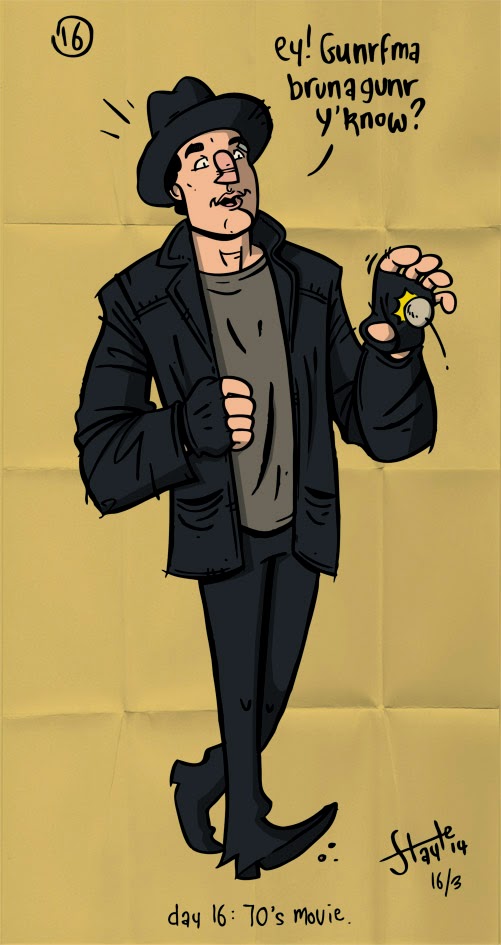 Before Rocky Balboa owned a sassy robot and spent his days going from montage to montage he was a really interesting character. Sylvester Stallone plays him with his heart on his sleeve and its fun to watch him go from quiet contemplation as he walks the streets to loud jokester whenever he visits Adrian in the pet store.
Posted by James at 16:29 No comments: 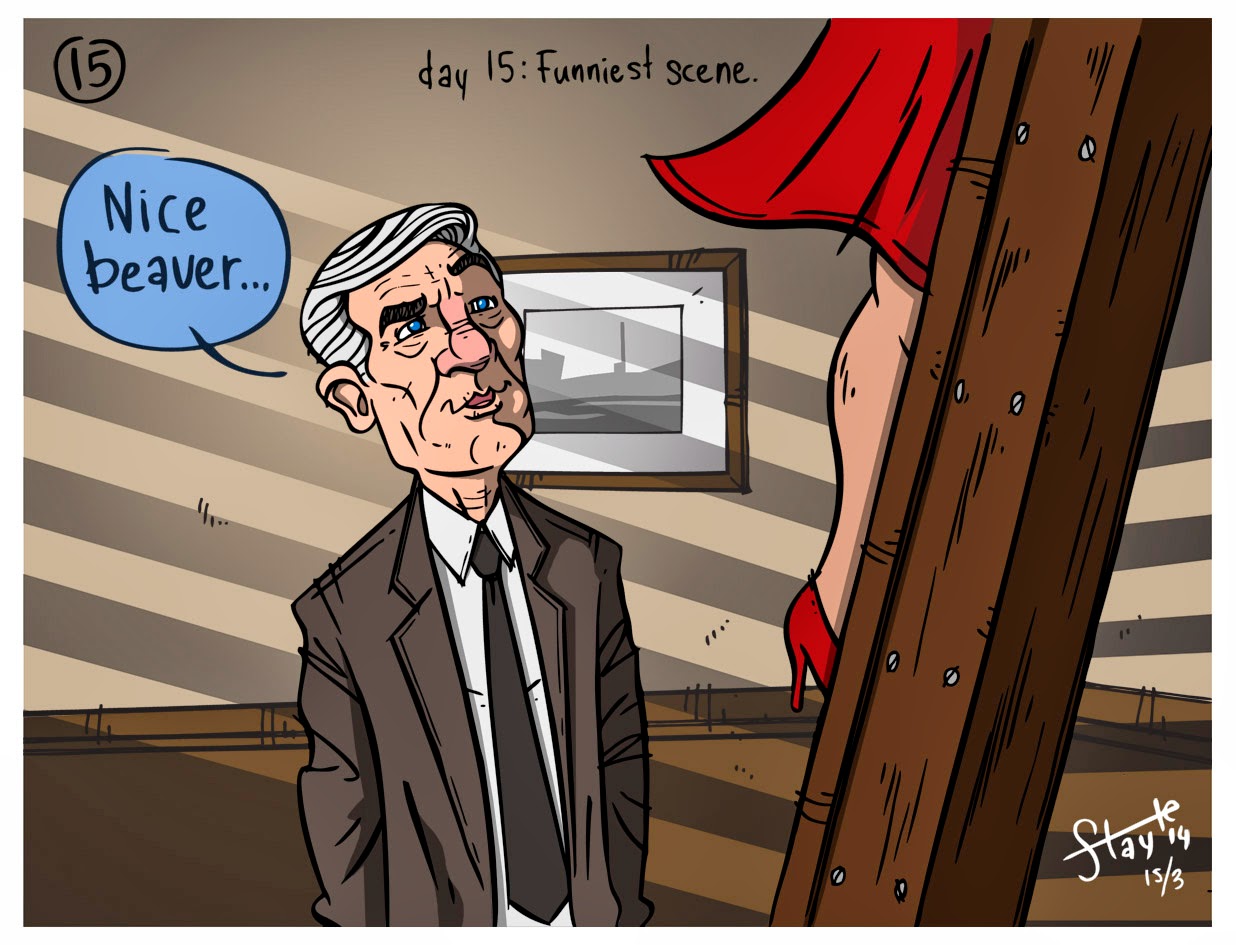 I remember the first time I watched The Naked Gun, I cried with laughter at this line. Even before the actual beaver makes an appearance, the idea of someone saying that out loud cracked my nine year old brain in half and my already odd sense of humour was forever warped. God bless you Leslie Nielsen.
Posted by James at 17:15 No comments: 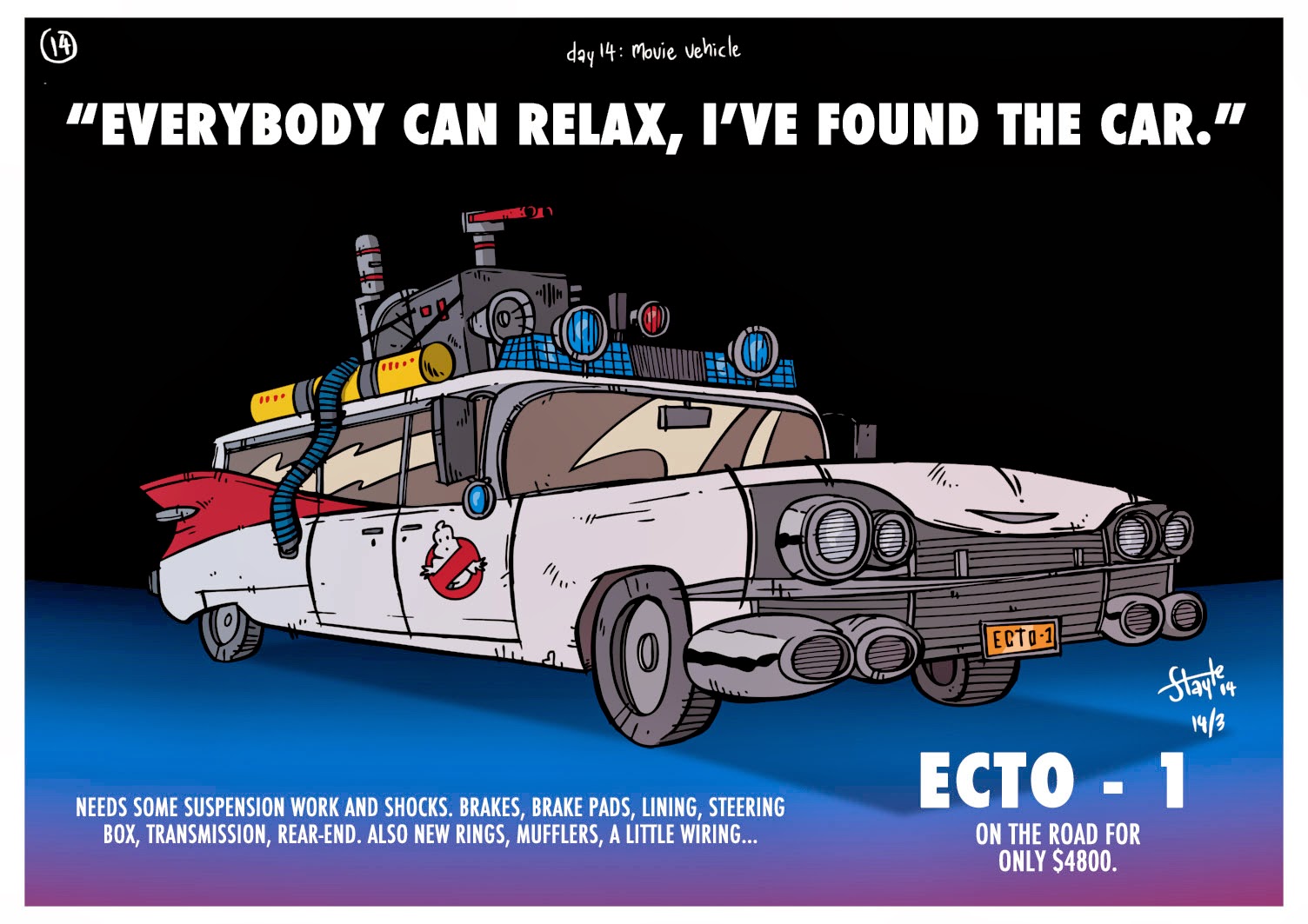 It's the Ghost-Chaser's Spookmobile!
Posted by James at 21:11 No comments: 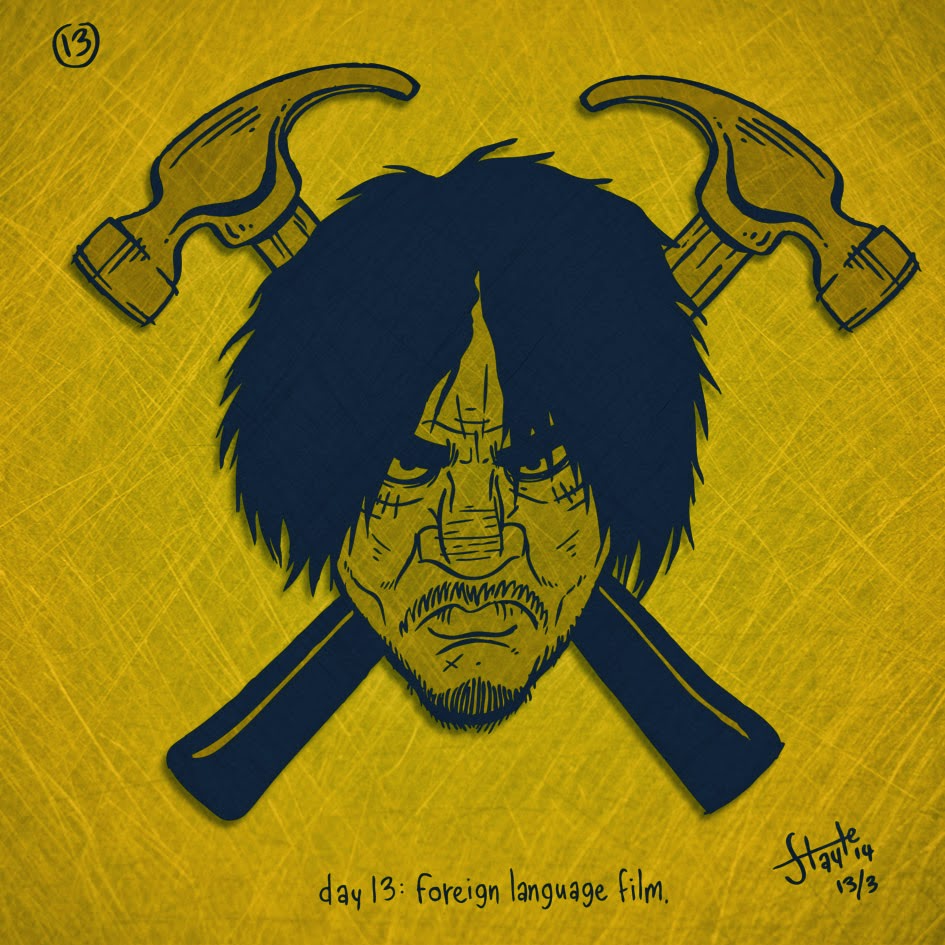 I chose the brutal and insane, Oldboy.
Posted by James at 20:16 No comments: 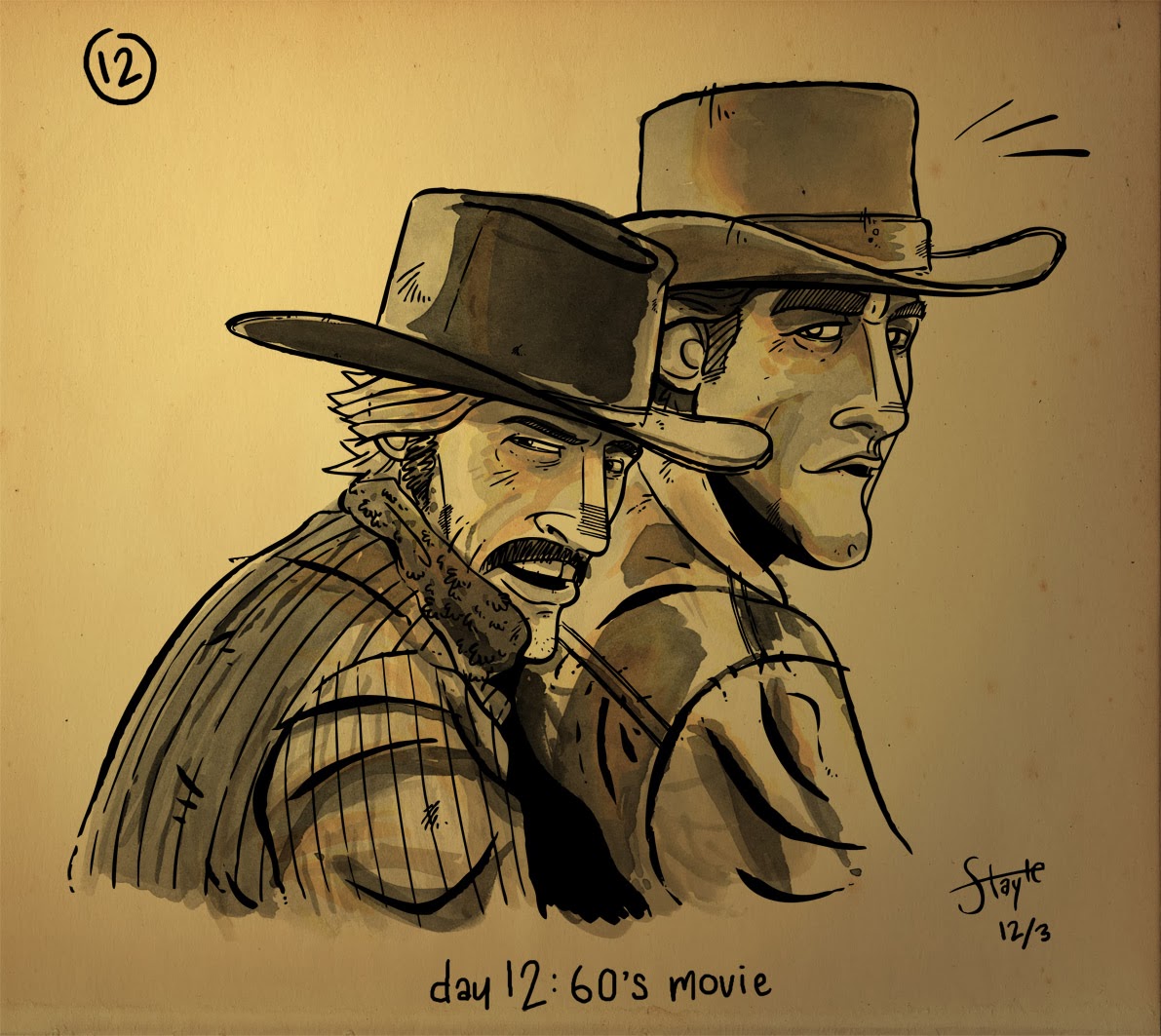 You never met a pair like Butch and The Kid.
Posted by James at 20:58 No comments: 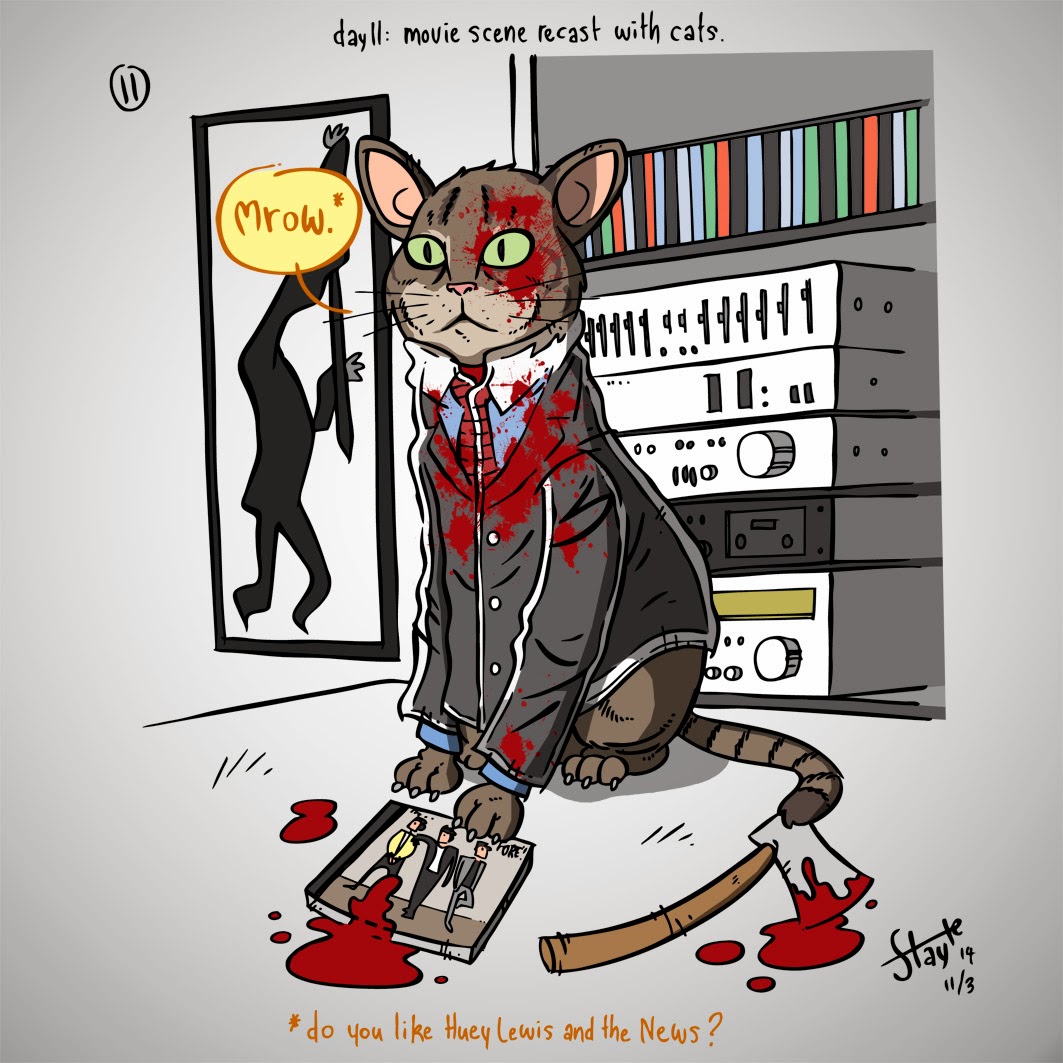 Americat Psycho? Catrick Bateman??
Posted by James at 19:38 No comments: 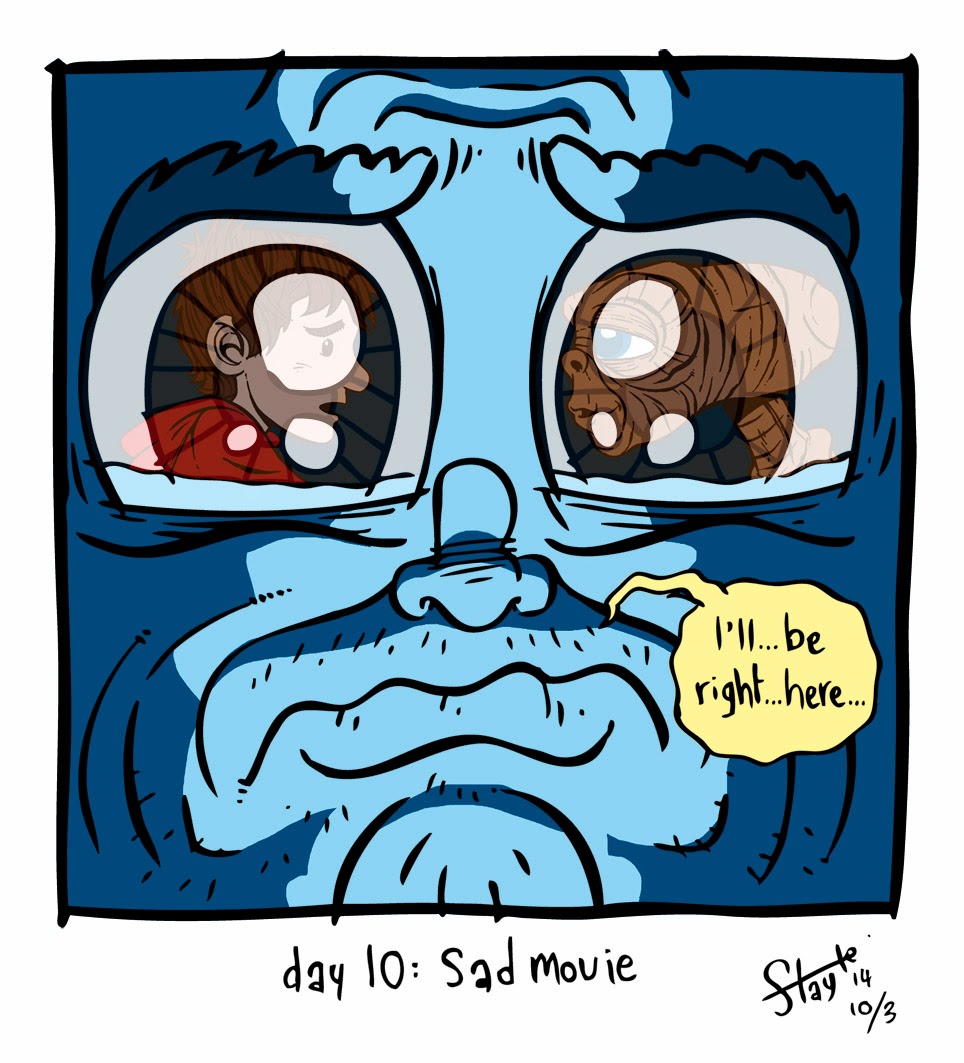 My stupid face, every time I watch E.T.
Posted by James at 20:19 No comments: 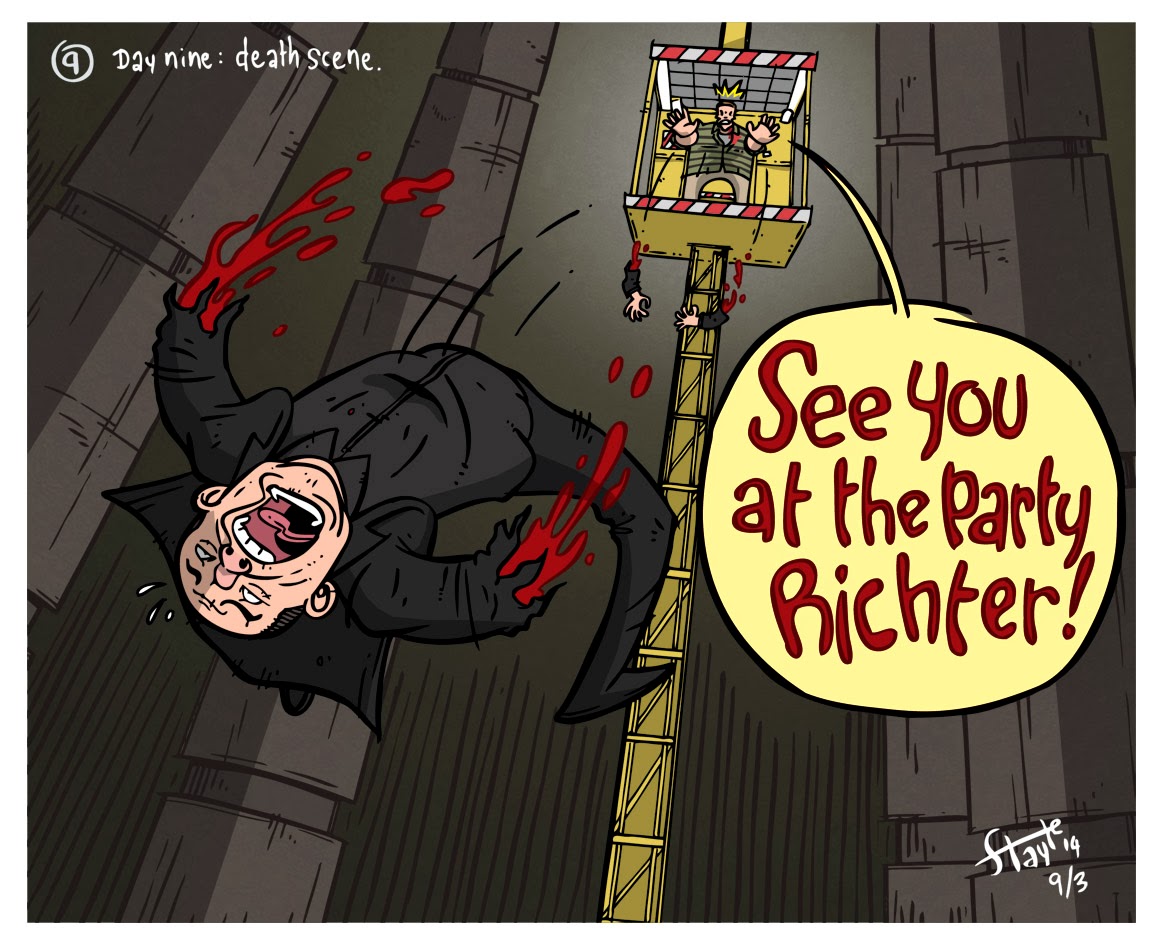 God bless you Michael Ironside and all the arms that depart your noble shoulders.
Posted by James at 14:32 No comments: 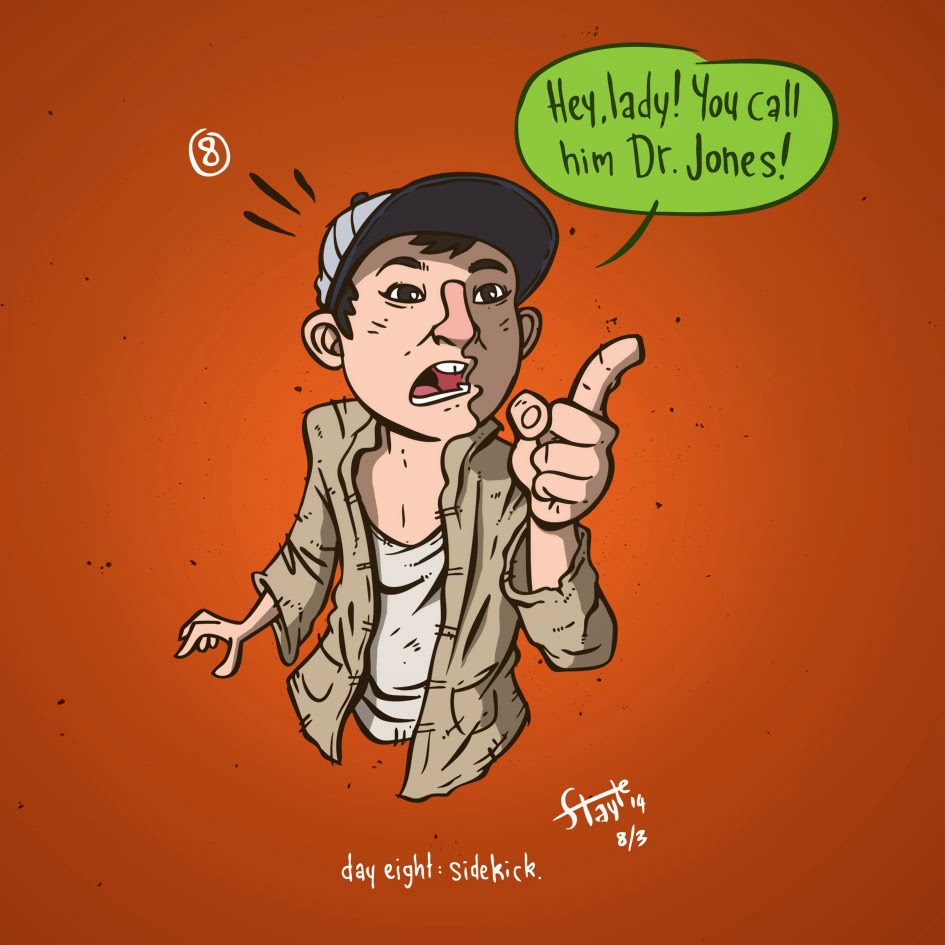 Okey dokey, Dr. Jones. Hold on to your potatoes!
Posted by James at 18:46 No comments: 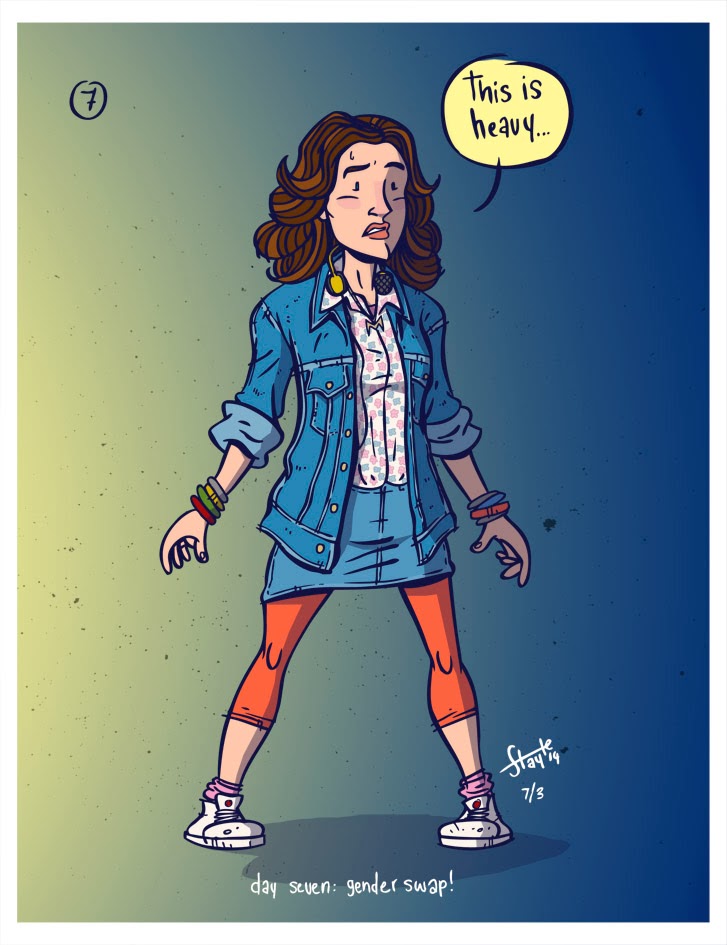 Today's challenge was to gender swap a famous character. I chose Marty McFly (or should I say, Martha McFly!!!!! Martha!!). While drawing her I realised that I'd made her look a lot like Marty's girlfriend, Jennifer. Coincidence? Or time-paradox?
Posted by James at 20:26 No comments: 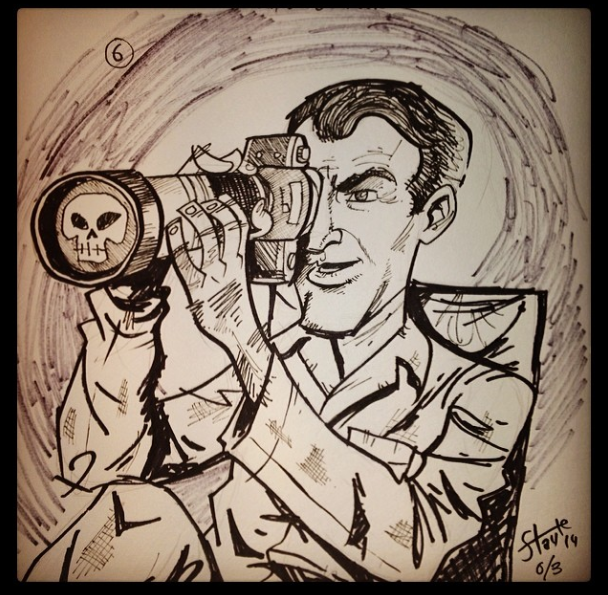 I'm a young, sexy philistine so I haven't watched many films past the 1970's. However I like Hitchcock a lot and Rear Window is one of my favourites of his. The set design for the apartment building James Stewart stakes out is amazing. Plus I'm quite nosy so the thought of watching a murder mystery unfold from the comfort of my living room sounds pretty fun.
Posted by James at 16:31 No comments: 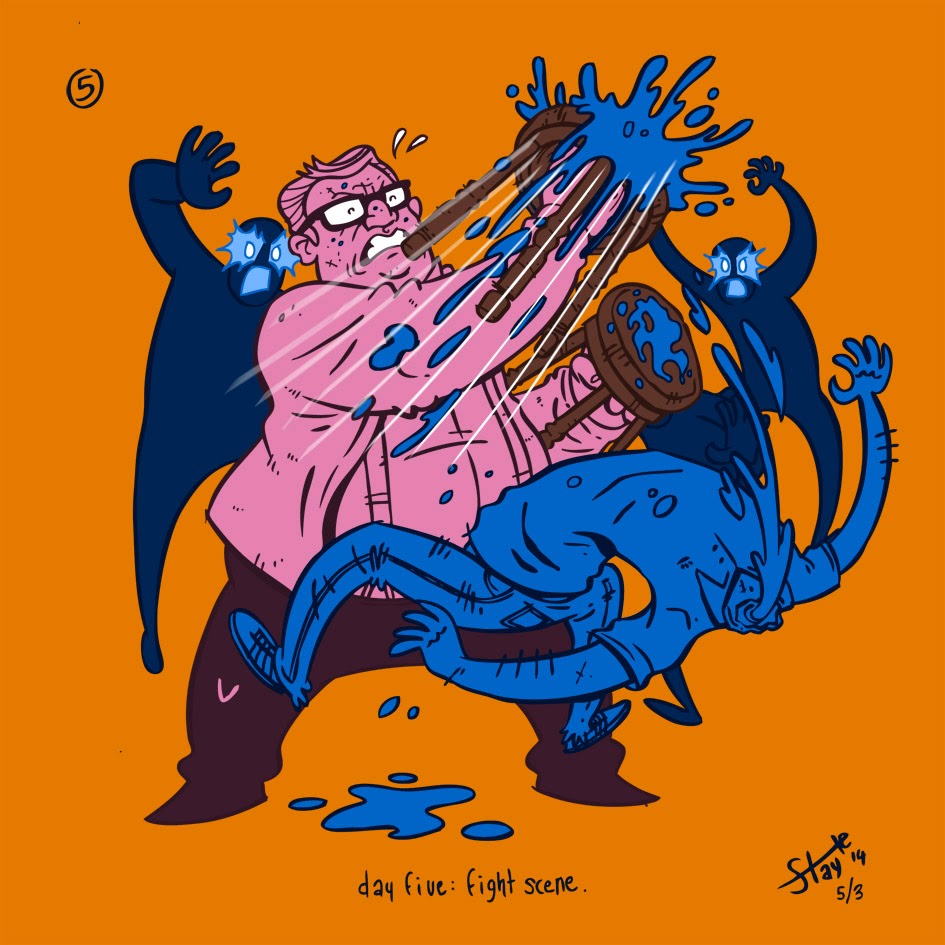 Todays challenge was to depict a fight scene. I went for the pub brawl between Andy (the Pink Hulk) and the Blanks from The World's End.
Posted by James at 23:46 No comments: 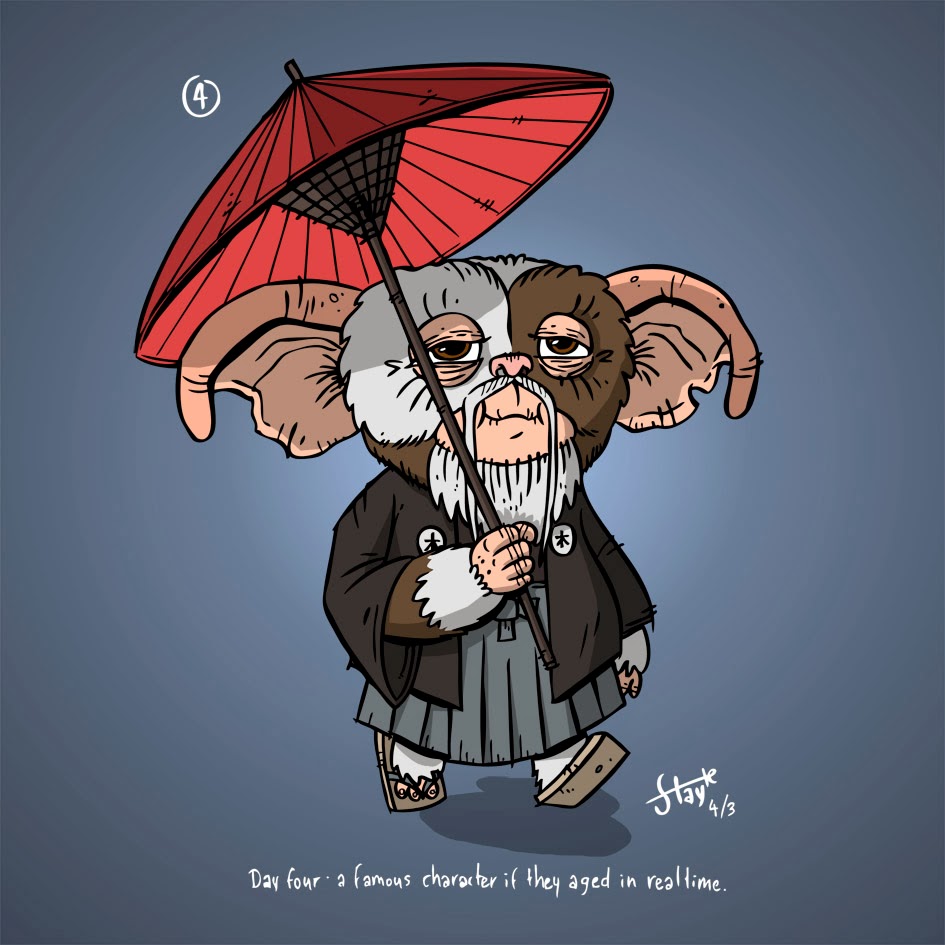 I'm doing a 30 day movie drawing challenge. Today's task is to draw a character if they aged in real time. I chose Gizmo from Gremlins. After the Clamp Towers disaster of '90, Billy Peltzer hoped that he and his tiny hairy friend could live a quiet life. And they did. Apart from similar gremlin outbreaks in 1997 and 2004. Now, after 30 years of ejecting evil clones from his soggy back, Gizmo is a little older and a little wiser, taking precautions to make sure it doesn't happen again. But it will... 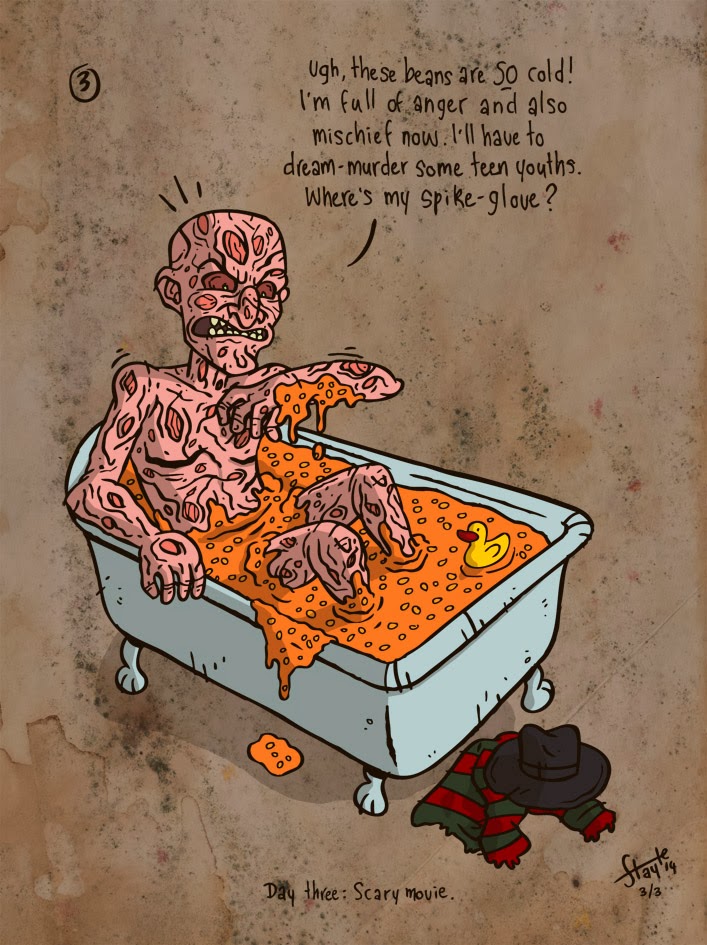 When I was 7 or 8, some friends tried to convince me to watch A Nightmare On Elm Street. I ran home terrified before it even got started. But for some reason I'd misinterpreted something on the video and was under the impression that Freddy got his demonic powers from having a bath in baked beans. This image filled me with more dread than a hundred tongue phones or exploding Johnny Depps.
Posted by James at 20:37 No comments: 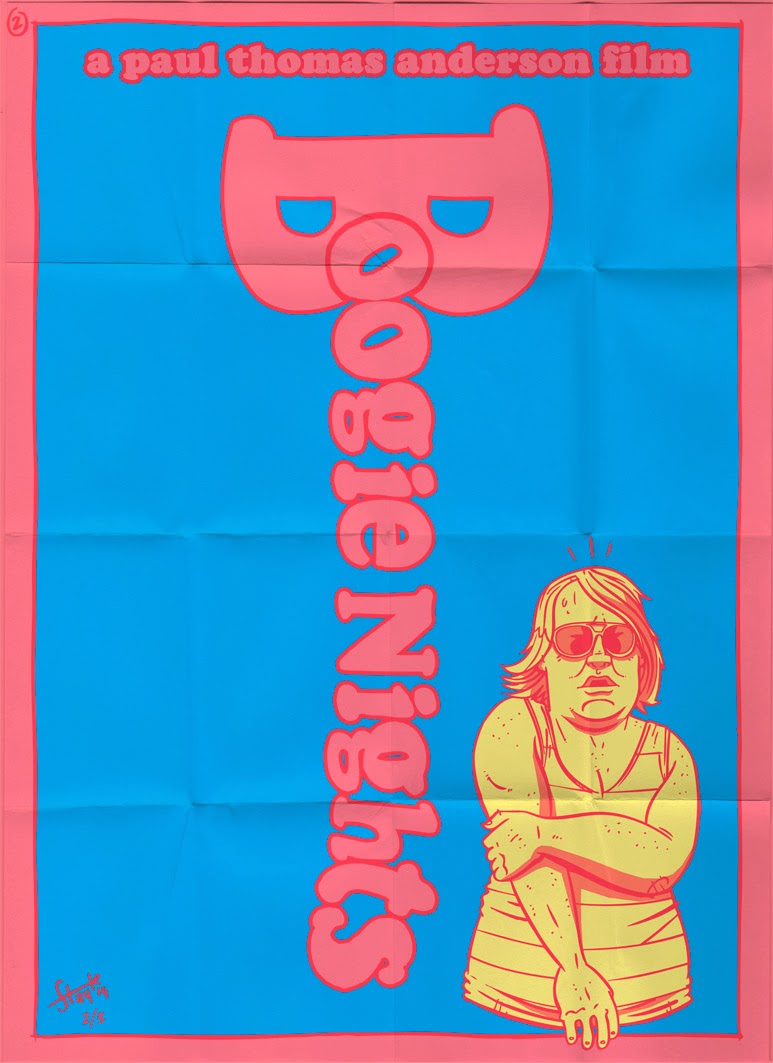 I'm not a big fan of minimalist movie posters (apart from the ones drawn by Olly Moss), they need to be pretty clever to be interesting when they're that…minimal. Thats not to say mine is that clever, its basically a willy but you get what I mean. I've just watched Boogie Nights again and forgot how amazing it is, plus I wanted to pay tribute to the late Phillip Seymour Hoffman.
Posted by James at 19:50 No comments: 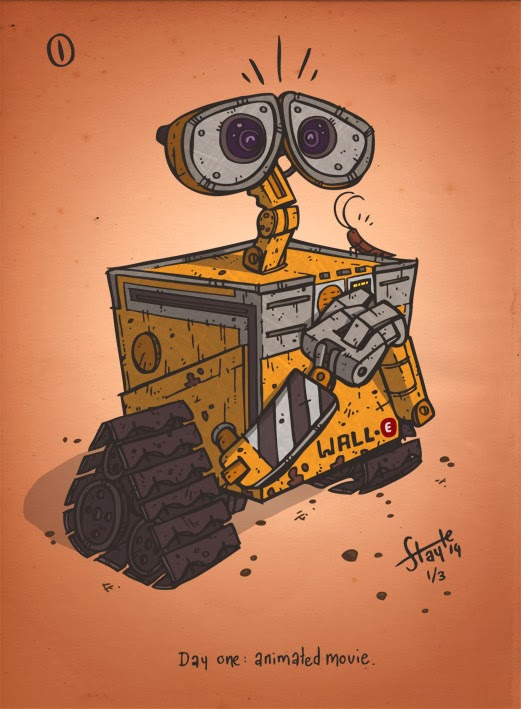 Day one is an animated movie so I chose my favourite Pixar film (and possibly one of my top films of all time) Wall-E. Not only is it an amazingly realised world, its also a beautiful film that never fails to get me choked up. By the end I'm always left trying to splutter out the words "he was a robot and he taught THEM how to be human!"to anyone else in the room.
Posted by James at 19:25 No comments: