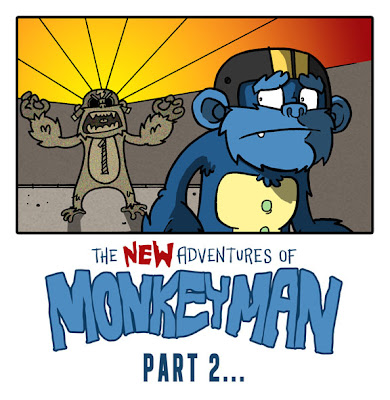 Week 2 of The New Adventures of Monkey Man is now online at Film Threat!

Written by the comedy genius what is Brian Lynch and drawn totally with a pencil by me! This week: STREET GANGS!

If you like it, leave us a message and share the comic with your friends. DO IT! (thanks!) 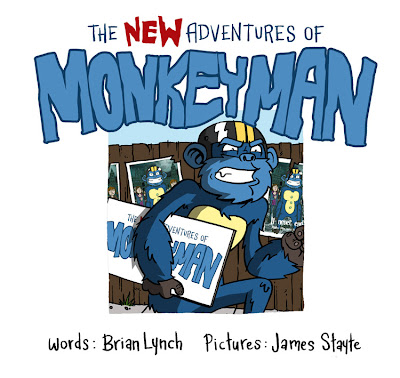 Part one of The New Adventures of Monkey Man is now online at Film Threat! Monkey Man is the brainchimp of writer Brian Lynch (IDW's Angel, Spike and forthcoming Ninja Turtles: Raphael micro series). He's written an awesomely hilarious strip and I couldn't be happier to be adding my dumb doodles into the mix! New stories are up every week so check it out and laugh until you cough up delicious blue furballs of comedy!
Posted by James at 19:13 No comments: 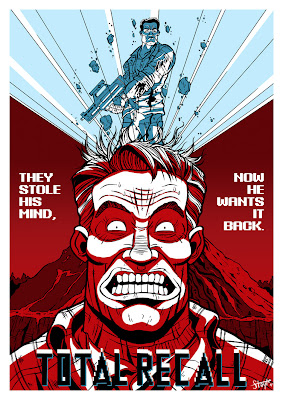 Total Recall was one of those classic ultra-gore masterpieces I got to see when I was slightly too young. Along with Robocop and Predator, all the exploding heads and liberal F-bombs shaped me into a fully functioning adult (who spends his time drawing fan-art).

Also I once saw the guy who played Quato! (the man, not the little stomach-gremlin, that would be weird) 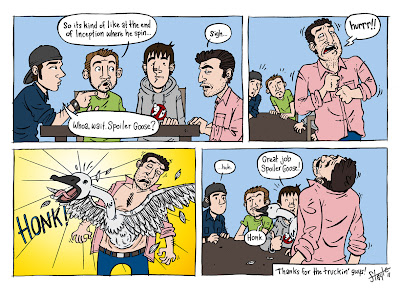 This is probably the most important picture of a goose bursting out of someone's stomach that I'll ever draw...

This was a comic done for Party Truck USA, an awesomely funny podcast by Brian Lynch, Rich Monahan, Brian Sadecki and Jordy Bogguss (as well as many guest stars) that races down the pop culture highway firing bullets of sweet comedy at all the movies, comics and tv shows along the way, much like that game, Chase HQ I had on the Commodore 64 when I was 8. I urge you to check it out and LOL your :( away.

After sending this picture to PTUSA I got a response from Brian Lynch which convinced me to send him a copy of my comic, that then lead to Brian offering me the chance to draw his webcomic Monkey Man and the rest is the future!

This is too much madness to fit into one text! 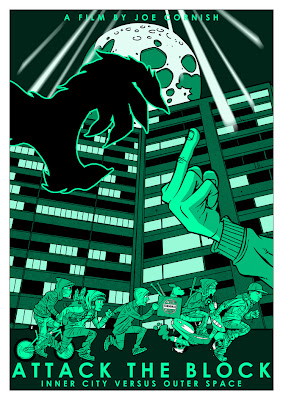 Attack The Block is an awesome film and I urge everyblud to go see it. I've been a big fan of Joe Cornish since The Adam & Joe show and his radio shows with Adam Buxton are part of the small group of podcasts that keep me sane while I scribble away at my desk. I can't wait to see what he does next.

Heres to you Torpedo Commander Cornish!
Posted by James at 17:17 No comments: